From small grills to the huge stoves, the grill comes in a variety of sizes and shapes.

Some are large enough to roast meat for 5-7 persons, whereas some are small enough to grill only one hamburger patty.

Regardless of size, if you want a high-end grilling device to enjoy scrumptiously cooked meat, then you must go for the diatomite hibachi grill.

It is not a smoker and not gas-powered.

It is not a electric grill neither includes mechanical parts.

Instead, this Yakitori Grill has a container that holds hot coals and a grill above the stove.

Some of the Diatomite Grills do comes with adjustable vents however.

When it comes to the parts of the grill, it only contains a box that includes a capacity of charcoal. The best thing about this Diatomite Grill from Kinka, is that they offer amazing grilling results.

While using the Diatomite Charcoal Hibachi Yakitori Grill BQ-8WF, you will not need to adjust the flames. It does not contain any dangerous liquid fuels like in other conventional grills.

It also does not include any moving parts that can be broken. And although some wood, any charcoal or other flammable materials can be used, it is best to use binchotan charcoal to get lip-smacking grilled food.

Erik Ramirez, the famous chef who is known for anticuchos, uses a traditional Japanese cooking method.

He employs a Konro, a countertop grill to cook the scrumptious food.

Not to forget, konro grills are made of diatomite.

The chef says that using such a grilling method is methodical and precise and recommends it for everything from skirt steaks and octopus to zucchini and asparagus.

When cooked on the Yakitori Grill, specifically on the diatomite grill, the traditionally grilled food will give you the real grilled-meat experience of Japan.

Diatomite is not a new name when it comes to the charcoal Kinka Bbq.

From small eateries to world-class restaurants, most chefs use diatomite-made grills to make mouthwatering and delicious grilled meals.

At present, there is one cooking technique that the world’s best restaurants use- grilling over an open flame.

This cooking tactic continues to be one of the oldest yet popular techniques around the world.

When it comes to authentic grilling pleasure, nothing can beat the Diatomite Grill.

If you are a true avid food-lover, you already know that this Kinka Grill is quite trending among chefs around the world.

So why wait? Order now, and get your Diatomite Grill delivered at your front door.

And Erik Ramirez is not alone in his reverence. The diatomite grill increasingly becomes almost an obsession among the emerging chefs.

Josef Centeno at L.A.’s Orsa & Winston sears the puntarelle wedges on the Yakitori grill. Ramirez says, “When juices and fat from the meat drip onto the binchotan charcoal, it creates a bursting cloud of flavors engulfing the food.

World’s famous chefs believe that the grilling results from this clay hibachi grill distinct from meat cooked on any other heating device. The Diatomite Grill creates a perfect combo of BBQ aroma and even sear.

Ramirez says that there is a delicacy to the Japanese grilling method, and Kinka’s Diatomite Charcoal Hibachi Yakitori Grill (BQ-8WF) is what creates the actual aromatic yet delicious blend of barbecue flavors in grilled meat.

What Charcoal Is Used In Diatomite Grill?

Many chefs suggest not using ‘regular’ charcoal in the Diatomite Charcoal Hibachi Yakitori Grill BQ-8WF. Regular charcoals contain hazardous chemicals that can cause some effect on one’s health.

Not only this, modern charcoal produces a lot of unwanted smoke and sometimes destroys the flavor of ‘real-grilled meal’. The professionals do recommend Binchotan, a traditional Japanese charcoal together with the Yakitori Grill.

Known also as ‘white charcoal,’ it is widely used in the traditional Japanese grilling cuisine.

Bichūya Chōzaemon created it from ubame oak, which is now known as the official tree of Wakayama Prefecture.

Among all the Hibachi Grills available on the market, the Diatomite Charcoal Hibachi Yakitori Grill (BQ-8WF) by Kinka is the best option. 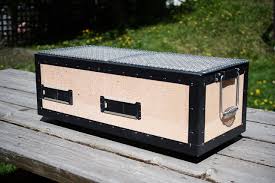 Kinka, the manufacturer of the grill, delivers high-quality grills.

The skilled workers at Kinka utilize their expertise to make the best grills in the world.

However, it is worth mentioning here that this charcoal grill is made of diatomaceous earth.

The workers at Kinka hit each piece with a hammer to ensure the grills do not have any crack within.

These handcrafters use their proficient skills to form a cooking grill meticulously.

It allows you to cook a meal for five to seven people at a time.

It is portable, easy to clean, and comes with great convenience.

Compared to other BBQ grills, the outside of the grill does not heat up excessively.

That means you can even touch the outside of the grill while grilling. If Binchotan charcoal is used in the grill, it’s emits far-infrared rays and this diatomite grill captures it with heat.

As a result, the stove’s inner wall reddens and leads to faster cooking.

The grills include ventilation windows, which you can use to adjust the heat.

Usually, the dripping juices and hot grease from the grilling meat cause regular burners to deteriorate quickly. This Kinka grill, on the other hand, is made of diatomite that offer excellent heat-resistant.

The Kinka Hibachi Grill is compact- the feature makes it an ideal grill for limited spaces. Other than this, it is very portable and thus, you can take it with you anywhere and enjoy grilling with your friends or family.

Often used, as we told before, together with Binchotan, the Japanese charcoal, which tends to deliver more heat than regular charcoals.

And as the diatomaceous earth used in the Kinka grill can withstand 1,000°C temperature the Binchotan charcoal used in Diatomite Grills burns faster and for longer.

This makes it a highly fuel-efficient Hibachi Grill. As it does not come at higher costs than other modern charcoals.

The Diatomite Charcoal Hibachi Yakitori Grill (BQ-8WF) made by Kinka is the best grill you can get your hands on.

But beware, this Yakitori Grill is not cheap. You will pay the price if you want the most popular Hibachi Grill worldwide.

Very Heat resistant, so saferto use.

It is quite versatile.

Does not contain any small parts that can wear out.

Does not contain moving parts to malfunction.

You can set it at any place. 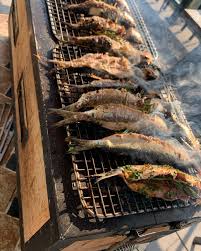 Kinka’s Yakitori Clay Grill is quite expensive relative to other grills, but it is the bang for the buck. Overall, Kinka’s hibachi grill is more safe, convenient, and durable than other conventional hibachi grills.

If you have planned to buy this Diatomite Hibachi Grill, then you should remember some safety measures before using the Kinka BBQ. A well taken care of Hibachi Grill will simply last longer and is safer to use.

Here are 3 tips for when using the Kinka Bbq Diatomite Charcoal Grill:

1
Place the Grill away from walls.

Make sure to place your Kinka charcoal grill away from any wall.
Remember that almost anything can catch fire.
If you feel the wall or anything else near the grill is getting to warm to touch, move the unit or the object immediately.

Always read the manual before using the grill. It only take a minute.
Make sure to follow these instructions properly.
If you have any specific questions, contact Kinka before you use the Diatomite Grill.

3
Clean the Grill after each use.

Inspect the clay grill before using it; ensure it is in good condition.
And use specific cleaning tools to clean the grill afterward. But be sure it’s cooled down properly!!
After cleaning the grill grates, make sure no bristles or food is still stuck.

Dated back to 20 million years, the creation of diatomite goes back to the Miocene Epoch. At that time, the Sea of Japan was a landlocked body of water. The volcanic activity around the land used to cause thermal springs, making an ideal environment ripe for diatoms growth.

Diatoms, which belong to a large and diverse group of single-celled algae called planktonic, float in the waters of lakes and oceans. Only a few types of diatoms live on the seabed, whereas others drink on the water. Most diatoms are microscopic, but interestingly, a few types are up to 2-mm in length.

The single-celled property makes diatoms unique. They create a silica-composed external wall, called frustules. Not to mention, the cell walls of diatoms have a delicate structure and are very thin. Diatoms live in water less than 30-ft deep, where the sunlight can penetrate through.

They are photosynthetic and require sunlight as a food source. While it is prolific, diatoms produce almost half of the organic mass in the oceans across the world. The small size and abundance of diatoms place them at the bottom of the marine food chain.

The explosive bloom of diatoms diminished water nutrients and blocked the sunlight needed for photosynthesis. As a result, diatoms started to die, yet their remains sink to the seabed. Those remains resulted in another boom, and the cycle continued for years. The repeated cycle of bust formed the abundant layers of diatomaceous earth.

Diatomite is a sedimentary rock comprises of silica. This friable material has low density and high porosity. The crushed or powdered form of diatomite is ‘diatomaceous earth.’ It boasts particle size and has low specific gravity.

All these properties make diatomite a useful as an absorbent, filter media, and a lightweight material for plastics, paints, and rubber.

Lompoc, the city of California, has the largest deposit of diatomite. In the country, seven different companies produce diatomite at ten separate mining areas in Washington, Oregon, Nevada, and California.

The Uses of Diatomite

The ancient Greeks used the diatomaceous earth to make bricks and blocks. Later in time, it became popular in Europe as in the United States for various industrial uses.

While it is a friable, high porous material, it moves on a conveyor belt through the factory’s long kiln to make it fire-resistant, tighter, and stronger.

A study reveals heating the material improves the absorption properties and surface structure of diatomite greatly.

The heating temperature used is usually lower than 1000 °C. Otherwise, the microporous structure of the material will change. The modified diatomite contains the properties of high porosity and moderate surface roughness.

Some factories in Japan utilized this material to produce charcoal burners. In addition, the filtration markets of the U.S. consumed 67 percent of diatomite mined in 2011. You can use Diatomite as a non-toxic insecticide to kill pests, especially bed bugs.

The material is part of the production of matches. Diatomite provides friction so that the matchstick can ignite, whereas it also slows the speed of ignition to allow the stick to combust.

The insulating properties and excellent absorbency of diatomite make it an ideal material for making heat-resistant bricks, filters, and of course Hibachi Grills.